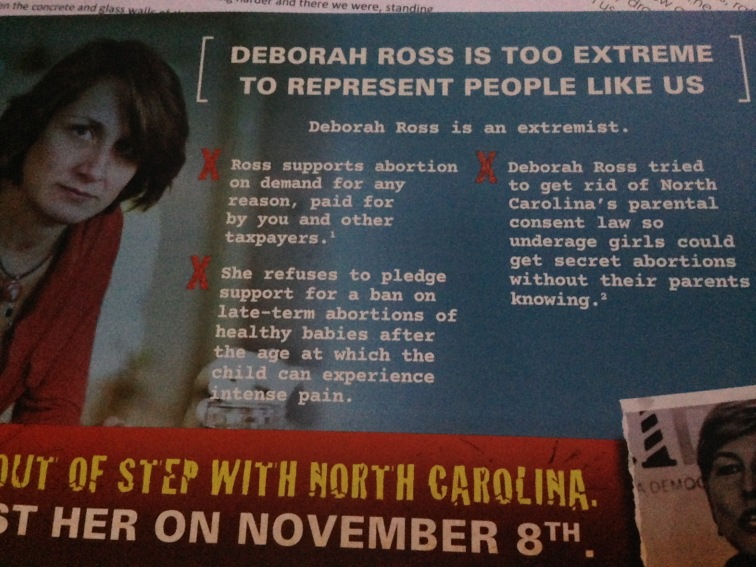 Researchers, journalists and political wonks have been very busy this election when it comes to the subject of fact checking. Of course the main focus has been looking into the claims and accusations of the most visible figures on the national stage, but there has been plenty of work to be done further down the ballot as well. In North Carolina, we are in the midst of an expensive gubernatorial race as well as a heated contest for US Senate. While these races may not receive tremendous coverage outside the sate, the people within the state have had ample opportunity to review and, if they are truly concerned with the future of the Tarheel State, read up on the individuals they’ll be choosing for these offices.

As an unaffiliated voter in North Carolina, I receive many mailers from both conservative and liberal camps, Republican campaigns and Democratic committees. Part of me enjoys being courted by both sides to vote for their candidates and causes even though my tendency is to vote for left-facing people. It also affords me the opportunity to see what kind of tactics each side is deploying, what brash statements and misguiding rhetoric they’ve used. This was what came to my mind when I received a mailer from the Susan B. Anthony List, a group that is officially not authorized by any particular campaign, but certainly is no fan of Democratic challengerfor the US Senate, Deborah Ross.

Abortion is the topic of this mailer. It’s goal is to convince the North Carolina electorate that Ms. Ross is “too extreme to represent people like us” (emphasis added). These kind of blanket statements are familiar features of political advertisements, but this idea of “people like us” struck as particularly presumptuous. A huge theme of the 2016 election has been group identity. White male, black male, homosexual, transgendered, female, immigrant, Muslim, not Muslim, pro-guns, anti-guns, wall-bulider or wall-destroyer … the process has tried so hard to categorize the nation like so many files in a cabinet. I am very happy to eschew the above title if adopting it means I have to support our state’s ridiculous HB2 law, our General Assembly’s apparent disinterest in handling coal ash as well as our increasingly gerrymandered congressional districts. I do not support any of those decisions and I do not support any candidate who believes we’re going the right way. I do not know who these people are that the Susan B. Anthony List thinks I am part of, but I can assure them that North Carolinians come in a wide range of political stripes and it is simple-minded to think we’re all cut from the same cloth.

Like any good piece of propaganda, this mailer also makes appeals to the emotions without providing any real supporting information. The mere presence of footnotes does not equate to a well-reasoned argument, especially when you are making serious claims such as “Ross supports abortion on demand for any reason, paid for by you and other taxpayers”. The page referenced notes Ms. Ross’s opposition to unnecessary waiting periods for abortion patients as well as ludicrously transparent ‘education and safety’ requirements put in place by governments to shame or frighten women. I am not sure how support for funding the State Abortion Fund can be construed as abortion carte blanche, but that is the beauty of these kinds of organizations: they can interpret information however they like and there is no review process except on the part of the voter.

It is even more outrageous when the message makes serious claims without even trying to support it. Take for example the mailer’s headline statement:

“U.S. Senate candidate Deborah Ross in an extremist, who refuses to support a ban on late-term abortions of healthy babies after the age at which they can feel excruciating pain.”

Allow that to simmer for a moment. The highly evocative word choices (extremist, healthy babies, age and excruciating) are superb rhetorical tricks used to capture the imagination and the reader’s pathos while simultaneously deflecting attention from the fact that this claim has absolutely no grounding in truth. No source is referenced, an omission that is particularly egregious seeing as how the mailer is making a significant scientific assumption (i.e. fetuses feeling degrees of pain). If a non-scientific source is making a statement such as this, I would think providing some scientific support would be crucial. If such research exists, I cannot fault the use of strong language to persuade, but without something to base the claim upon, the words become simply hyperbole.

The significance of the word extremist is not lost upon the shrewd reader. One can only assume we’re expected to make the leap from liberal-minded, pro-choice candidate running for election to a baby-killing maniac bent on the destruction of wholesome conservative values. It is not a mistake that the authors have employed the same word we hear daily in regards to Islamist terror movements despite the fact that those extremists put the orthodoxies and conservative philosophies of American conservatives to shame. I find it remarkable the rhetorical acrobatics propagandists perform to make these kind of connections.

The mailer also accuses Ms. Ross of undermining parental rights by opposing laws and thus allowing “underage girls [to get] secret abortions without their parents knowing.” Firstly, I object to the idea of “secret abortions”. The only secret abortions are the ones that take place outside of a safe medical facility. Sadly, I was unable to read the language of North Carolina’s parental consent law, but I’m sure it has a similar tenor as other laws passed by other states in recent years. The source cited clearly supports the fact, if not the sentiment, of the mailer, but I would hesitate to call LifeNews.com an unbiased and reliable source of information. Points for trying, though.

Personally, I find it difficult to take seriously any literature that arrives, unsolicited, from any political organization, whether openly endorsing a candidate or not. I would like to point out that I do not consider myself a Democrat or a Republican, largely because of the absurdity of squeezing the entire spectrum of political discourse in this country into two monolithic parties. I would gladly vote for a Republican if that candidate would admit that regulations are not evil, the marketplace does not have all the answers and that the Constitution is not a chapter of the Bible. So far, however, not a single Republican has said anything of the sort, so I find myself again this year voting for the blue side.